9 Steps for Meeting a Stranger’s Dog

Approaching another persons’ dog is something that we do quite often that we don’t even think about. Since being a kid most of us have most likely learned that it is ok to go say hi to a stranger’s dog. Some people ask permission and some people don’t. You may think you know what you’re doing, but the majority of people don’t. I’m going to cover 9 things you should do(or not do) when approaching a dog you haven’t met before or steps you should ensure people follow before they meet your dog. 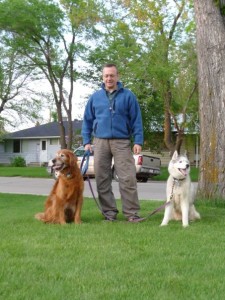 To start off however, I’m going to share a meeting from my past that had gone terribly wrong. Growing up we had two big dogs. We had a Golden Retriever and a Siberian Husky. Whenever we took a trip to the mountains people would line up to see our dogs. Especially since half the people thought our Husky was a wolf, and the other half wanted to see our Golden Retriever who was just a couple months old at the time. We let people say hi without even thinking about it until one man came along and wanted to say hi to our Golden Retriever. We said sure and the next thing we knew the man took our leash and used it to lift our puppy to his level. Obviously we grabbed our dog quickly and left. Most people wouldn’t think of doing this but you may be surprised. Dogs don’t speak English so we have to be the voice for our dogs and decide what is alright and what isn’t.

So let’s get to the steps for meeting a stranger’s dog.

1. Evaluate yourself
Are you partially scared of saying hi to the dog because of a bad experience in the past you are trying to get over? Super excited and can’t wait to say hi? Dogs can respond to our body language. If you are scared and giving jerky motions you are more likely to get the dog worked up, and more likely to be bit if the dog is also scared. If you are super excited the dog might get excited as well and you are more likely to be jumped on or bit if the dog is aggressive. The best thing you can do is be in a calm state and then approach the owner.

2. Ask Permission
This might seem obvious but you would be surprised how many people don’t ask me permission to come pet a dog I’m training. Many clients have expressed the same issue with their dogs that aren’t always friendly to other dogs or people. Ask permission from the owner and take directions. Don’t start approaching the dog until the owner says it is alright.

3. Look at the dogs body language
If the dog looks uneasy or appears to be showing very different body language the closer you approach it is possible that it might just be a better idea to not say hi or if you are the owner tell the person that they can’t say hi today. If the dog is showing the whites of the eyes, growling, barking, appears to have a Mohawk form of hair sticking up…there is a  chance the dog may be aggressive.

4. Allow the dog to come to you
I see it happen all too often that someone asks permission to see a dog and then takes their hand and shoves it in the dogs face to smell. Is this how you want to be greeted? Put your hand out instead at a distance so the dog can come up to it to smell if it wishes but don’t force it. Also get closer to the dog but don’t go the full way in unless directed to because the dog is in a command like a sit or down. Treat it like a first kiss, don’t go all the way in, let the dog decide if it wants to be pet and come part way in.

6. Don’t bend over the dog
Towering over the dog and bending over the dog is a very dominant position to be in. Some dogs might be ok with it but many aren’t. Instead squat down to see the dog and have straighter posture or even lean back a bit to be more welcoming to the dog to want to come see you. This will especially help those dogs that have some fear or are wary of people.

7. Pet the dog under the chin, on the neck or side.
Some dogs don’t like being pet in certain spots. Follow the owners direction first and foremost but as a general rule don’t start petting on the top of the head or around the eyes, nose… Reaching over is a more dominant position to put yourself in. Let the dog get to know you a bit first and allow the dog to show you where it wants to be pet if at all.

8. Ask permission before giving treats
Like humans, dogs have allergies and shouldn’t just receive food all the time. If you wish to give the dog a treat, ask permission. If you are the owner, be careful who you allow to give treats to your pet. Unfortunately there are people that don’t like dogs who try to poison them. If you aren’t sure just say no, or provide your own treats to give.

9. Don’t get angry if the pet owner says no to saying hi
It is the pet owners responsibility to make sure their pet and you stay safe. If they say you can’t say hi, don’t take it personally. I have told many people that they can’t say hi to a dog I’m with and often they get upset with me. What they don’t realize is that the dog is aggressive and they would most likely be bit if they get too close.